A quick pre-script note before I get in to the blog post: A great big thank you to my readers who apparently are still reading even though I have been overly lax in keeping up with my blog over the Summer. I’ll be catching up over the next few weeks so you will have lots of new material to read soon. I promise! 🙂

When you’re not from around these parts, there is always a certain level of curiosity about the Hamptons. And once you’ve moved to NYC, who doesn’t want to casually say to their friends from other parts of the country, “Ah yes, darling…we were Bunburying in the Hamptons this weekend and it was quite droll.” So, is it worth all the hype? Hmmm…you know, to each their own. But, I will give you my general thoughts including thoughts on the two places we stopped for food.

In arriving to Easthampton, there was a part of me that wondered how much of this village does Ralph Lauren own with no fewer than, I think four or five stores along the main strip? I lost count after the first few since that wasn’t our main objective. My friends and I were barely people watching while simply hoping to stumble upon a reasonable and interesting place for lunch. This one-track focus led us to choose Serafina because we have a lovely, but radical friend who bears a version of the same name.

Upon entering the restaurant, we were seated promptly even though the host was on the phone when we arrived. This is very much appreciated and generally sets the tone for the dining experience. Our waiter was quick to take our orders, but I wouldn’t say he was especially helpful. We asked if the bloody marys would be worth ordering and he noted that they were good without really giving much detail. This would have been fine if they really were good. Sadly, the bloody marys we were served were on the underwhelming side. They lacked any real flavor. It definitely needed a more flavorful tomato juice, a stronger dash of Worcestershire sauce, and a bit more celery salt. I do realize I perhaps shouldn’t expect so much from an Italian restaurant, but when you’re charging $12 for a bloody mary which is a very standard brunch/lunch drink, it needs to rank at least a 3 or higher on the quality/taste scale. This one was very much a solid 2 at best. Although I didn’t taste it, my friend noted that his margarita was a 3 – so, on the taste scale, not exciting, but passable. 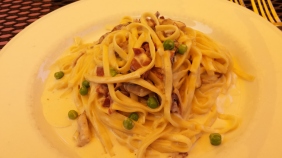 Our food was thankfully, better. The tagliolini di cortina was probably the best out of the dishes we ordered. The prosciutto added the right touch of smoky savoriness to the dish without overpowering the other flavors. This dish would be a 4 on the taste scale. I felt the ratatouille was very well-balanced and correctly-sized as a side dish for sharing. I didn’t need to add more salt to it, but I noticed my friend added salt to his portion. This one is a solid 3.5. The house salad, di stagione, was a nice complement to the pizza we ordered. The only thing to note about the salad is that upon first glance, there doesn’t appear to be any dressing on it so my friend asked the waiter, “Is there any seasoning on the salad?” 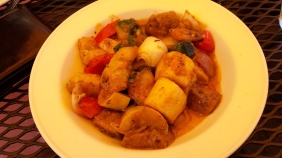 Although English is not her first language, most people would understand that she’s asking if there is any dressing on the salad. For some reason, our waiter didn’t understand this though and responded, “No.” So, she asked for a lemon wedge which she promptly received. Luckily, my friends know I like to share food even when dining out so I was able to intercept before she drenched the salad in lemon juice. It already had a nice house dressing which didn’t require any additions beyond freshly ground pepper. Our pizza, the al caprino, was tasty. The goat cheese added a very nice layer of complexity to this otherwise, very simple pizza. My only complaint about the pizza is that the toppings were a bit on the sparse side. I wouldn’t expect crazy amounts of toppings on an Italian pizza. But, only 6 pieces of roasted red bell pepper on a 12″ pizza is too sparse in my opinion. 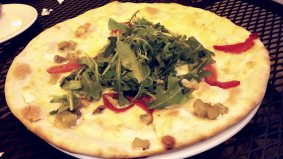 And, I’m not sure about the amount of roasted eggplant on the pizza without modification. My friend with whom I shared the pizza is allergic to eggplants so I had requested that they put all of the eggplants that would normally have been on the pizza onto one side of the pizza. If this was the case, again, the amount of eggplant on my side of the pizza was the amount that I felt was adequate. However, if it normally only has half this amount, I would again say that it needs a little more to be “worth it”. With these things in mind, I would give the pizza a solid 3 of of 5 stars. The overall experience was good so I would recommend it to friends as a somewhat solid choice if you happen to be passing through. It’s along the lines of what I expect for a mid-range experience without anything spectacular to write home about.

After a long day of exploring and beaching at Montauk Beach, I needed a bathroom and had been craving a turkey burger for several days. You wouldn’t think finding the two would prove so difficult, especially since I was willing to have a beef burger. It took three tries to find a restaurant that had a bathroom. However, the wait for a table there was strangely, well over an hour at 8:30ish on a Saturday night. So, we opted to move on to a place that was suggested by the someone at the Sloppy Tuna where we found the public bathroom. En route to the next place though, we came across 668 The GIG Shack and decided to stop since we had been in search of food for well over 30 some minutes by that point and we just wanted to eat.

When I don’t bother to take any pictures of the food, you know it’s NOT a good sign. Once again, we were seated promptly which made me think we would have a good experience. I think the service even started out well enough. The experience didn’t start going downhill rapidly until our food arrived. My friend ordered his burger well-done and I ordered my burger medium. Strangely, both burgers came out medium-well which at that point, we didn’t bother to send back since we were hungry and it was edible. However, I did think it was odd that when being served a burger and fries, I would need to specifically ask for mustard. (And, I kind of think the ketchup was brought to us mainly for fries.) Am I the only person who would normally add ketchup and mustard to a burger from a non-fast food joint? It was definitely not a tasty enough burger to enjoy it without condiments. And for the quality of it, $16 for this burger and fries is QUITE over-priced. At best, the quality of this burger barely even matches up to a chain diner/restaurant such as an Applebee’s or TGI Friday’s which I tend not to visit unless forced to by someone else or pure lack of alternate choices.

The fish tacos that the restaurant raves about were mediocre as well. The hard taco shells (which is wrong on many levels especially for a fish taco, so don’t get me started here) looked like they could have been of the pre-packaged sort. They do claim that they are homemade though…that’s all I’m saying about that. My friend who ordered the fish tacos noted that the fish was bland, but that the mango salsa served on top of the fish taco was very good and therefore, compensated for the lack of flavor in the fish. In my opinion though, each component of the dish really should be seasoned well enough that other parts of the dish shouldn’t have to compensate for what is missing in the key ingredient of the dish which once again, leads me back to, the food was wayyyyy over-priced for the quality. 2 tacos served with a house salad for $17 is barely worth it here.

All in all, if the service had been consistent and on par throughout, these prices would probably have not been so noted. But, when you ask your server for a refill of water two times with an adequate wait time in between those requests and still don’t receive it until after you finally stop the hostess to request more water, that’s completely unacceptable! In addition, when we asked our waiter for the check, he almost literally tossed the check onto our table and ran off. When he came back to pick up the payment, he literally was going to run off before we could tell him how to split the payments. There were three of us at the table and only my credit card was in the check folder which was open and not closed, by the way. I exclaimed, “Wait a minute!” which led to a very brief pause where my friend seated to my left, reached over the table and handed him her credit card. Before we could say anything, he grabbed her credit card and almost bolted again. I finally yelled at the waiter, “Will you just wait a minute?!” My friend who was seated on the side of the table where the waiter was standing finally had an opportunity to give the waiter his credit card. It took us another of his impatient minutes for us to explain how to split the payments between our three credit cards and for him to confirm that he understood the split. What a terrible end to an already disappointingly mediocre experience!

Some of this might have been acceptable or overlooked if they really were that busy. Although the restaurant was full, it wasn’t as if it was overflowing with people and unmanageable. I noticed that the same server treated the white-trashy (this opinion was formed from overhearing their conversation as well, not just the way they looked) family at the table next to us very differently than he treated us. He placed the check gently on their table and even leaned down and stated something along the lines of, “It was very nice to serve them.” Was the difference in our service levels simply a case of skin color? I hate to think this, but I can’t imagine what we could have done to receive such poor service! We didn’t complain about the food even though it didn’t come out exactly as ordered. We weren’t demanding about anything and when we asked for more water both times (that we didn’t receive it), it was when he was already at our table. Honestly, I can’t think of anything else that it could be except that we were the only table within my view of any diversity within the patrons (two Latins and an Asian). I’m positive that anyone can do far better in choosing a dining locale with regard to food quality and service level in Montauk. 668 The GIG Shack, you need to step up your game!

Be the first to know when the next Dinner with Foodie Friends will be scheduled!

Simply send me an email at chopsticksorafork@gmail.com to request to be added to my Foodie Friends mailing list. Don't worry. Your email address is safe with me.

Chopsticks or a Fork

Chopsticks or a Fork

for my fine foodie friends!

for my fine foodie friends!